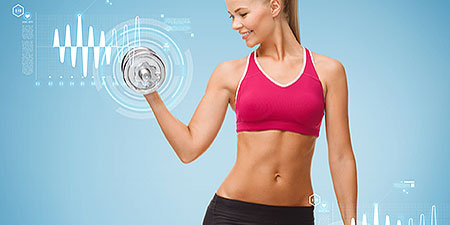 Your Anti Aging Plan must include four essential activities:

Regular moderate exercises can add 15 – 25 years to your lifespan

It is well known that moderate exercise, as opposed to strenuous exercise, can significantly improve one’s health and make life longer. Different studies have attempted to show how exactly exercise affects one’s health. The credit to physical activity is given for various effects, for example for it’s ability to relieve stress, lower blood pressure, and increase the level of endorphins (brain hormones that increase the feeling of happiness and well-being and also reduce the amount of fat); physical activity increases the fat burning enzymes in the muscles and helps you stay fit and maintain weight loss; it strengthens heart muscles and improves circulation of blood thereby reducing the risk of heart disease; it reduces the level of glucose and cholesterol in blood and calcium in bones (the cause of osteoporosis); it improves your respiratory system, strengthens your lungs and helps to control asthma; finally, it creates the feeling of self-confidence and control over one’s body and life.

Mainly due to all these benefits of moderate exercise, physical activity is considered to be essential for those who want to prolong their life span. Several extracts from the studies that show the correlation between moderate physical activity, on the one hand, and the risk of some major diseases and all-cause mortality, on the other, can be found below.

The following types of activity is mostly important for your health and longevity:

Moderate Exercises reduces death risk – A study
In the recent developments researchers of Cambridge University, London School of Hygiene and tropical medicine (LSHTM), and Karolinska Institute in Sweden have found that physical activities having mild intensity helps a lot to increase the life span and thus helps in reducing the risk of early death. The analysis was driven out from the results of various studies carried out on health and related exercises and their impacts. The studies showed vast benefit among individuals who regular does mild exercises like walking and cycling. Even though the more physical exercises helps to gain strength and longevity, moderate exercises also results into good benefits. According to this study, it has been clear that even small amount of exercises i.e. 30 minutes of daily mild work out for 5 days a week can help a lot to achieve longevity. The study further elaborates that 30 minutes daily exercise reduces the death risk by 19% while an hour exercise daily can help to reduce the death risk by 24%. James Woodcock, the lead researcher concludes that even mild exercises daily can help individuals to achieve health benefits.

Attenuating the mortality risk of high serum uric acid: the role of physical activity underused.Ann Rheum Dis. 2014 Jul 22. pii: annrheumdis-2014-205312. doi: 10.1136/annrheumdis-2014-205312
Chen JH1, Wen CP2, Wu SB3, Lan JL1, Tsai MK3, Tai YP3, Lee JH3, Hsu CC3, Tsao CK4, Wai JP5, Chiang PH6, Pan WH3, Hsiung CA3.
BACKGROUND:
High serum uric acid (sUA) has been associated with increased mortality risks, but its clinical treatment varied with potential side effects. The role of physical activity has received limited attention.
METHODS:
A cohort, consisting of 467 976 adults, who went through a standard health screening programme, with questionnaire and fasting blood samples, was successively recruited between 1996 and 2008. High sUA is defined as uric acid above 7.0 mg/dL. Leisure time physical activity level was self-reported, with fully active defined as those with 30 min per day for at least 5 days a week. National death file identified 12 228 deaths with a median follow-up of 8.5 years. Cox proportional model was used to analyse HRs, and 12 variables were controlled, including medical history, life style and risk factors.
FINDINGS:
High sUA constituted one quarter of the cohort (25.6%). Their all-cause mortality was significantly increased [HR: 1.22 (1.15-1.29)], with much of the increase contributed to by the inactive (HR: 1.27 (1.17-1.37)), relative to the reference group with sUA level of 5-6 mg/dL. When they were fully active, mortality risks did not increase, but decreased by 11% (HR: 0.89 (0.82-0.97)), reflecting the benefits of being active was able to overcome the adverse effects of high sUA. Given the same high sUA, a 4-6 years difference in life expectancy was found between the active and the inactive.
CONCLUSIONS:
Physical activity is a valuable alternative to pharmacotherapy in its ability to reduce the increases in mortality risks from high sUA. By being fully active, exercise can extend life span by 4-6 years, a level greater than the 1-4 years of life-shortening effect from high sUA.

You may have heard the advice “If you exercise, you’ll live longer.” The good news — or the bad news, if you hate doing anything more active than downloading iTunes — is that it’s true.Research backs this up. A 2007 study in the Journal of the American Medical Assn. found that fitter people lived longer, even if they had extra pounds around the middle. Among 2,603 adults 60 and older enrolled in that longitudinal study, the fittest people (those who did best on a treadmill test) also had the lowest risk factors for hypertension, diabetes and high cholesterol.Most of the negative changes to our bodies over time can be chalked up to two things, says Wojtek Chodzko-Zajko, head of the department of kinesiology at the University of Illinois at Urbana-Champaign: normal aging and disease-related aging (that is, changes accelerated by illnesses and conditions such as diabetes and heart disease). Exercise, he says, can reduce the severity of both types. Strength maintenance: Normal aging results in a gradual loss of muscle mass (about 1% a year) that begins in middle age.

Strength-training can offset this loss, called sarcopenia, Chodzko-Zajko says. “The link between functionality and longevity may be indirect but more muscle mass allows you to be ambulatory and maintain function, whereas in a wheelchair you can’t.”

Having stronger muscles — especially leg muscles — and better balance may mean fewer falls, a leading cause of death among the elderly, according to the American Geriatrics Society. Cardiovascular health: Over time, arteries become stiffer, paving the way for cardiovascular disease. The chemical composition of the artery walls begins to shift, says Douglas Seals, a professor in the department of integrative physiology at the University of Colorado, making the walls more rigid.

“That stiffening of the arteries can cause changes in your blood pressure,” putting extra stress on the heart, Seals adds. Regular aerobic exercise, he says, slows or reverses some of the changes.

Diabetes risk: As we age, blood-glucose control becomes less robust, making us more insulin-resistant and increasingly susceptible to diabetes. People also tend to gain weight as they age, further upping the chances for developing the disease.

During aerobic exercise, muscles take up glucose from the blood and use it for fuel, keeping the body’s blood sugar levels low. Exercise also causes the pancreas to decrease production of insulin. Continuous, steady exercise especially causes the liver to take lactic acid, amino acids and fats and turn them into glucose, further feeding the muscles and regulating blood sugar levels.

Inflammation control: Inflammation can also worsen as we age and become exacerbated by extra weight, upping the risk for cardiovascular disease, lowering the immune system and paving the way for bacteria and viruses to take hold — even cancer cells to grow. But exercise may cause a decrease in levels of C-reactive protein, a marker for inflammation.

Physical activity, fitness and fatness: relations to mortality, morbidity and disease risk factors. A systematic review.
Obes Rev. 2009 Sep 9.
Fogelholm M.
The Academy of Finland, Health Research Unit, Helsinki, Finland.
Summary: The purpose of this systematic review was to study the relative health risks of poor cardio-respiratory fitness (or physical inactivity) in normal-weight people vs. obesity in individuals with good cardio-respiratory fitness (or high physical activity). The core inclusion criteria were: publication year 1990 or later; adult participants; design prospective follow-up, case-control or cross-sectional; data on cardio-respiratory fitness and/or physical activity; data on BMI (body mass index), waist circumference or body composition; outcome data on all-cause mortality, cardiovascular disease mortality, cardiovascular disease incidence, type 2 diabetes or cardiovascular and type 2 diabetes risk factors. Thirty-six publications filled the criteria for inclusion. The data indicate that the risk for all-cause and cardiovascular mortality was lower in individuals with high BMI and good aerobic fitness, compared with individuals with normal BMI and poor fitness. In contrast,having high BMI even with high physical activity was a greater risk for the incidence of type 2 diabetes and the prevalence of cardiovascular and diabetes risk factors, compared with normal BMI with low physical activity. The conclusions of the present review may not be applicable to individuals with BMI > 35., exercises, cooper, bmi, fitness, mortality, aerobic, cardio, sarcopenia.
Exercise helpful for lymphoma patients – says researchers:Researchers at University of Alberta have found that daily exercise can prove to be helpful for lymphoma patients receiving chemotherapy. A three year study shows significant improvements in physical functioning and overall quality of life benefits in patients with lymphoma. 122 participants with Hodgkin’s and non-Hodgkin’s lymphoma were included for this study. They were distributed in groups by disease type and treatment status that whether they were undergoing chemotherapy at the time or receiving no treatments.

Participants were randomly assigned to an exercise program designed to maximize cardiovascular fitness. The participants were asked to under go exercise three times a week that lasts for almost twelve weeks. Lymphoma patients who received the exercise intervention reported significant improvement in physical functioning, overall quality of life, less fatigue, increased happiness, less depression and an improvement in lean body mass. The group receiving chemotherapy benefited as much as the group that was off the treatments.

Kerry Courneya, Canada Research Chair in physical activity and cancer in the Faculty of Physical Education and Recreation who led this study said that vigorous intensity exercise program did not interfere with lymphoma patients ability to complete their chemotherapy treatments. He further added to found that 46.4 per cent of patients in the exercise group had a complete response to their treatment compared to only 30.8 per cent in the usual care group.

Just fill in QUESTIONNAIRE without any obligation and we will answer you.

Our clients testimonials
you may find here

Please contact us with any questions or comments you may have

Find us on Social Media!